hublotwatches.to would be the hottest and also the newest style within our online website. who sells the best https://www.cartierwatch.to is amazingly distinct from the astonishing wonder of amazement. quality https://de.upscalerolex.to/ for sale. strict requirements are the characteristics of cheap watchesreplica.ru under $57. youngsexdoll.com raises the pure essentials of watchmaking to the level of art. this is the only best jimmychoo.to cheap jimmy choo supplier where you can get the high quality wide range replica. www.ipromise.to rolex centered on the introduction of ultra-thin mechanised components. the 2017 best https://www.robins.to come in many styles and they are affordable to all the watch.

M.U.S.C.L.E. or Muscle Men figures, are small collectable figures approximately 2in.tall and molded out of a monochromatic PVC gum.
The name M.U.S.C.L.E. is an acronym for ‘Millions of Unusual Small Creatures Lurking Everywhere’ and they are based on an Intergalactic Wrestling theme.

M.U.S.C.L.E. were sold by ©Mattel in the USA, Canada, United Kingdom & Australia from 1985 to 1988. However, they were originally released in Japan in 1983 by Bandai as a line of figures called ‘Kinkeshi’ which was based on the Manga stories of ‘Kinnikuman’. In 1984, Mattel were looking to launch a new collectable figure range and decided the Japanese Kinkeshi figures were the perfect line to launch quickly. Bandai produced the figures and licensed them to Mattel who would market them as M.U.S.C.L.E. However, Mattel required the figures to be manufactured out of a harder plastic, in a darker pink colour and also slightly larger in size.
(see ‘What’s The Difference Between M.U.S.C.L.E. and Kinkeshi Figures?’ at the bottom of this page…)

M.U.S.C.L.E. were based on characters from the Japanese cartoon and Manga stories of ‘Kinnikuman’ (literally ‘Muscleman’) It was created by Yudetamago, who are a duo consisting of story writer Takashi Shimada and artist Yoshinori Nakai. The Manga was published in Shueisha’s Weekly ‘Jump’ (see comic below). Kinnikuman was a much more detailed, ongoing storyline compared to the one-off basic theme Mattel gave M.U.S.C.L.E.

BRIEF HISTORY…
Kinnikuman was originally created as a parody of ‘Ultraman’ (a popular Japanese show in the 60’s & 70’s). Kinnikuman (real name Suguru Kinniku) was a clumsy superhero who was only ever called upon to battle demons and monsters if no other superheroes were around. His powers came from eating garlic (ninniku), which would gradually fill a ‘garlic meter’ on his forehead and when the garlic meter filled up he would grow into a giant to fight the monsters.

THE KINNIKUMAN STORY…
As the Kinnikuman story developed, it focused solely on pro-wrestling. The main storyline involves Kinnikuman finding out that he is the missing Prince of the planet ‘Kinniku’. The planet Kinniku is known for producing the greatest ‘Chojin’ (Supermen) in the universe but with Kinnikuman being a clumsy fool, he must prove himself worthy of the throne. To do this he enters into numerous wrestling competitions and battles evil Chojin, culminating in a tournament between Kinnikuman and five pretenders to the throne:

Many of Kinnikuman’s allies started out as bad guys:

(all these figures were also available as M.U.S.C.L.E. but it should be pointed out that Buffaloman a.k.a. ‘Terri-Bull’ was the leader of the bad guys in M.U.S.C.L.E.). 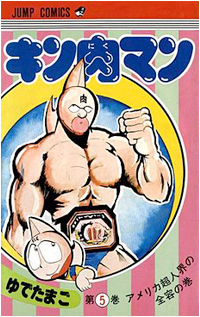 As the popularity of Kinnikuman increased an anime was created as well as tons of merchandising. Amongst the most popular of the merchandise were the ‘Kinnikuman Keshigomu’. These were soft erasers molded into the Kinnikuman characters. Japanese kids played with them as toys and started calling them ‘Kin-Keshi’ for short. They were soon marketed as ‘Kinkeshi’ and accessories were also released such as a wrestling ring and a colosseum. It was around 1984 that Mattel came across the Kinkeshi figures and had the idea to turn them into M.U.S.C.L.E. …

THE M.U.S.C.L.E. STORY…
The basic M.U.S.C.L.E. story was still about intergalactic wrestlers but the characters names were changed, Kinnikuman was called ‘MuscleMan’ and Buffaloman was selected as the leader of the bad guys and renamed ‘Terri-Bull’.

How many M.U.S.C.L.E. figures were available?

The official Mattel poster shows 233 figures, but there are more! The Hard Knockin Rockin’ Wrestling Ring came with two figures not featured on the poster: ‘MuscleMan’ and ‘Terri-Bull’. The Terri-Bull was a completely new sculpt, while MuscleMan is a smaller version of the poster figure #141 but with a rectangular belt buckle. The Mega-Match board game came with a green version of the Terri-Bull wrestling ring sculpt but was unique to the game. The mysterious figure called Satan Cross takes the total official M.U.S.C.L.E. figure count to 236.

What’s the story with the ‘Satan Cross’ figure?

No one knows why Satan Cross was not featured on the poster, it could be as simple as it ruined the symmetrical layout of the poster or he could of been a ‘chase figure’. Satan Cross has a hole in his back, which in the Kinkeshi line has separate pair of legs which slots in to create a horseman style. The hind legs have never been found in the M.U.S.C.L.E. line and were most likely never released by Mattel, further adding to the mystery of this figure.

The University of M.U.S.C.L.E.’s author Chad Perry spent years trying to track down the original Mattel employees at the time of M.U.S.C.L.E. production to find out as much as he could about the toyline and a possible reason why Satan Cross does not appear on the poster. His detailed investigations can be read in full here »

Over the years what seem like undiscovered M.U.S.C.L.E. figures have appeared in the collecting community. The first one to be classed as ‘rare’ was Satan Cross, but he has since been demoted to ‘desirable’ as he frequently appears on auction sites – but he still holds an aura of mystery and a premium price-tag.

There have since been discoveries of what might be even more M.U.S.C.L.E. figures and if they are then they hold the distinction of being labelled ‘Super-Rare’ as only a few known examples exist. They have never been truly confirmed as authentic M.U.S.C.L.E. because they have not been found in sealed packaging like Satan Cross has, but they are worth featuring as they are great looking figures and have commanded astronomical prices since they appeared on the scene. They seem to be constructed of the same PVC plastic as genuine M.U.S.C.L.E. and are the same shade of pink. They also feature the trademark Y/S.N.T. stamp on their backs so they could well be M.U.S.C.L.E. but until they are found in sealed packaging we will never know for sure.

jkaris, the owner of LittleRubberGuys.com purchased a 28 Pack of M.U.S.C.L.E. off an online Japanese auction and discovered 11 figures that are not featured on the poster. They all had the Y/S.N.T. stamp and were all in the M.U.S.C.L.E. pink. They have subsequently been named ‘The Magnificent Eleven’ and are all pictured below along with the other Super Rare figures.

A more detailed write up on the Super Rare Figures can be read over at The University of M.U.S.C.L.E.

What is the M.U.S.C.L.E Figure Classification Guide?

The M.U.S.C.L.E. Figure Classification Guide was collated by Chad Perry of The University of M.U.S.C.L.E. with the help of lots of collectors input into a database over a long period of time. It utilizes all of the currently available information and presents it as a visual guide for quick, easy referencing of figures. It illustrates exactly what colours they were and were not produced in and categorizes them into 3 groups:
Class A, Class B, Class C. These groups help differentiate how common or uncommon the figures are. Colours with a box around them indicates the figure was not produced in that colour.

Here is an example…

All genuine M.U.S.C.L.E. figures have a stamp on their backs reading Y/S.N.T. This is the copyright for the Kinnikuman series from which M.U.S.C.L.E. originated:

What packaging did M.U.S.C.L.E.s come in?

M.U.S.C.L.E. figures were available in three assortments: 4 Packs, 10 Packs (Trash Cans) and four different 28 Packs. With the 4 Packs you could see which figures were getting, whilst the 10 Pack Trash Can was opaque so you couldn’t really make out which figures were inside, although if you are familiar with the figures you can make them out by shaking it around a few times. The 28 Packs had a die-cut window which allowed you to see about seventeen of the figures.

For further information and pictures of all the M.U.S.C.L.E. Packaging and the accessories that were available please read the Products Guide…

What M.U.S.C.L.E. Accessories were available?

Aside from the massive range of flesh and colour figures there was hardly any accessories available for the M.U.S.C.L.E. men. The complete range is listed below…

For further information and pictures of all the M.U.S.C.L.E. accessories please read the Products Guide…

Which M.U.S.C.L.E. Figures and Accessories are common and rare?

Nathan Newell, author of one of the longest running M.U.S.C.L.E. sites on the web Nathan’s M.U.S.C.L.E. Blog breaks down the product availability as follows:

What’s the difference between M.U.S.C.L.E. and Kinkeshi figures?

There is quite a noticeable difference between M.U.S.C.L.E. and their Japanese counterparts. Kinkeshi are smaller, made from a softer rubber and are lighter in color as you can see in the pictures. Kinkeshi were relased in various colours that M.U.S.C.L.E. were not, such as yellow, white and a darker green and the line had over 400 figures to collect compared to M.U.S.C.L.E.’s 236.

Its interesting to note that Mattel had Kinkeshi figures in the early M.U.S.C.L.E. advertisements which suggests that either they were planning on releasing all the figures at some point or they were just the only figures available on the day of the photo shoot when they were creating the marketing. There probably was an intention to release more figures from the Kinkeshi line but the popularity dropped with the rise of Nintendo so they were never put into production. One theory is that Satan Cross might be one the characters that was going to be part of the next wave of figures.

Overall, M.U.S.C.L.E.s are made to a higher standard. The plastic is harder and the detailing of the mold is more defined, they just generally feel of much better quality than Kinkeshi or any bootleg.

Fake M.U.S.C.L.E.s, also called ‘bootlegs’ are generally a much lighter colour and are made out of a cheaper plastic than M.U.S.C.L.E. plus the molding is poor. Bootlegs are also usually smaller than M.U.S.C.L.E.s but not always. A fake M.U.S.C.L.E. figure will never have the Y/S.N.T. stamp on their backs and they also come in different colours that M.U.S.C.L.E. were never produced in such as dark brown. You shouldn’t have trouble spotting a bootleg at first glance, but if you are unsure just check the reverse of the figure, most of them have China stamped on their backs! 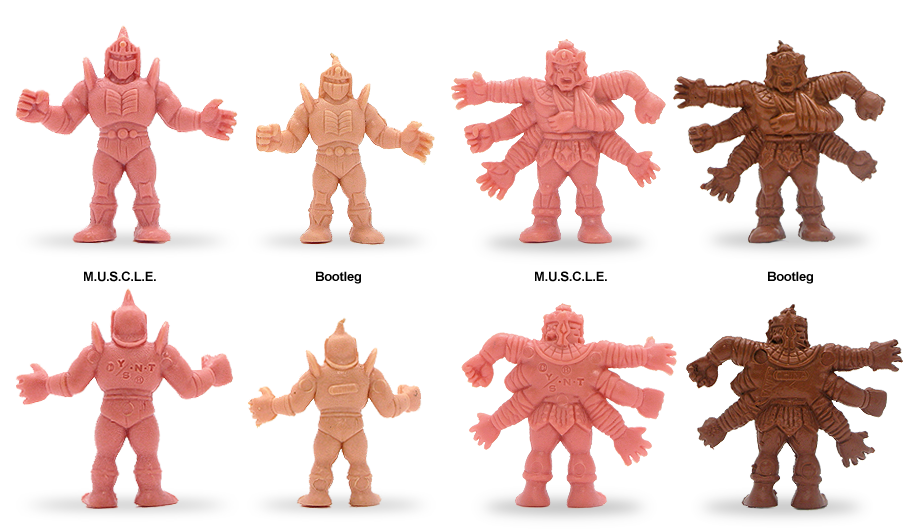